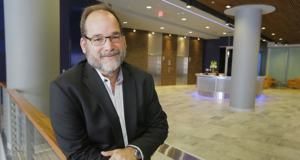 “Nothing hurts a project like this more than having a long, elaborate decision-making loop. That was not the case here,” says Don Kohlenberger, owner’s representative for Camelot LLC, owner of the Mayo Clinic Square building.
(Staff photo: Bill Klotz)

The new Minnesota Timberwolves and Lynx training center and corporate headquarters in downtown Minneapolis is described in team marketing materials as the “most advanced training center in the NBA.”

But before the team members moved into the 107,000-square-foot facility, which was dedicated in a grand opening event Wednesday, the construction team had to do some pretty advanced work of its own.

The training center is part of the ambitious $50 million makeover of the former Block E building at 600 Hennepin Ave. It shares space in the building, now known as Mayo Clinic Square, with the new 20,000-square foot Mayo Sports Medicine Clinic.

That included working around functioning businesses, remaking a struggling retail building for an entirely different purpose, and rolling with the punches as surprises popped up along the way.

“This was a unique project — very challenging and very rewarding,” Kohlenberger said.

Among the technical challenges: Some of the beams and pipes were in locations that conflicted with the story told by old building documents, while columns and floors were not “as level as you would want,” he said.

But the project had a strong team, led by Golden Valley-based Mortenson Construction, and a “well-defined and lean approval process for the hundreds of decisions” made along the way, Kohlenberger said.

“Nothing hurts a project like this more than having a long, elaborate decision-making loop. That was not the case here,” he added.

The project started in February 2014. Minneapolis-based RSP Architects designed the building exterior, and AECOM, which is based in Los Angeles and has an office in Minneapolis, designed the training center.

Built by Mortenson, the training center includes space for more than 167 Timberwolves and Lynx employees.

It was built with convenience and high performance in mind.

Athletes can get an MRI on the spot at the new Mayo Sports Medicine Clinic under the same roof, for example, or watch some game film in an 85-seat movie theater (an updated remnant of the old building, which housed a multiplex theater).

They can subject themselves to interviews in a media room adjacent to the basketball practice courts, or work out on state-of-the-art weight training equipment, which was designed with input from the players.

Coaches’ offices look down on two basketball practice courts – one each for the Timberwolves and Lynx.

Four therapeutic pools containing 8,400 gallons of water and an underwater treadmill provide cardio training and help players to “rehab as quickly as possible,” said Bryan Lansing, an in-arena host for the Minnesota Timberwolves who led a tour of new facility.

Connected by skyway to Target Center across the street, where the men’s and women’s teams play their home games, the building even has an underground parking garage linked by private elevators to the locker rooms above.

“That kind of weeds out your excuses for not getting to the gym,” Lansing said.

The facility’s design has a palpable sports vibe.

Katie Andres, a Timberwolves employee who showed off part of the space, said the third- and fourth-floor office area is designed to mimic a sports arena, with high ceilings and gymnasium-style lights.

“We have had a dozen teams look at what we are doing here — not only in the U.S., but in New Zealand and China, as well,” she said. “We just gave a tour to some Olympic athletes from China.”

During the Wednesday tour, visitors saw sports programming on a ribbon of LED TVs around the perimeter of the space, and photo murals of Timberwolves players in action high above the office cubicles.

Guests pulled out their mobile devices and snapped photos of a “History Wall,” which depicts everything from the awarding of the Timberwolves franchise in 1987 to rookie Zach LaVine’s winning performance in the most recent NBA slam dunk contest.

NBA Commissioner Adam Silver, just 12 hours removed from handing the league’s championship trophy to the Golden State Warriors in Cleveland, said at the grand opening that the new facility is the “gold standard” for training centers.

Not every team will win the NBA title, but they can all “operate in a world-class fashion,” he said, alluding to the new spaces around him. “This is how championship organizations are built.”