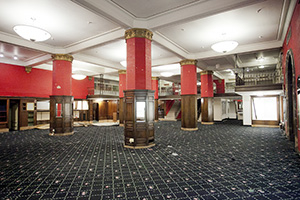 The former Hudson’s jewelry store space in the Dayton’s Project will largely be preserved in the renovation of the 1.2 million-square-foot complex at 700 Nicollet Mall in downtown Minneapolis. (Staff photo: Matt M. Johnson)

Once a week, a demolition team working on the Dayton’s Project at 700 Nicollet Mall holds a meeting to decide exactly what is getting torn out of Minneapolis’ most prominent former department store.

The project — which will convert 1.2 million square feet into retail and office space — started a year ago after Macy’s closed its downtown Minneapolis store.

The project’s majority owner, New York-based 601w Cos., is keying on nostalgia to enhance the project’s profile. The company has resurrected the original name of the 12-story department store. It has also instructed Minneapolis-based general contractor Gardner Builders to prioritize nostalgia and history as the three-building complex gets a two-year renovation and redesign.

“There’s a lot of conversations about do’s and don’ts,” said Gardner CEO Bob Gardner during a mid-construction walk-through on Tuesday for local media.

That said, the demolition crew hasn’t been shy about throwing things away. About 100 workers are split between three shifts to get the building ready for construction, Gardner said. They’ve removed 36,130 cubic yards of debris, about 75 percent of which has been recycled. 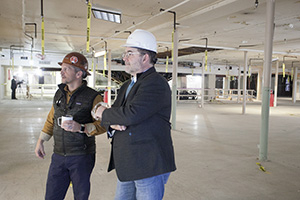 Much of it is layer upon layer of renovations done throughout Dayton’s and Macy’s ownership of the buildings. The store was built in 1902 for the original Dayton’s department store and expanded several times.

Thirty-six of the building’s escalators are also being disassembled and removed to make way for a new set of elevators.

Architectural details including the interior of the former Hudson’s jewelry store, decorative columns, windows, some flooring and even a perfectly preserved public restroom dating to the 1920s will be kept, according to the project team. The building owner is seeking a historic designation from the Minnesota State Historic Preservation Office.

The project has yielded a number of surprises, from boxes of nesting paper Easter eggs from the middle of the last century to long-hidden wallpaper. But the best surprise for 601w Cos. and minority owners Telos of Chicago and Minneapolis-based United Properties is how well the structure has endured, said Don Kohlenberger, president of Minnetonka-based Hightower Initiatives, who is acting as the owner’s representative.

The wood foundation of the original portion of the building is sound, and floorplates that run across the three buildings in the complex join almost seamlessly.

“It’s amazing how they kept it all level,” Kohlenberger said during Tuesday’s event.

New project renderings released Tuesday are closer to what the finished project will look like, said Steve Bieringer, design manager for the project’s architecture firm, Gensler.

Work is on track for tenants to move into the complex in mid-2019, Gardner said. Construction work will start as soon as the redesign is approved by state and federal historic preservation agencies, he said. From that point, about 300 workers split between two shifts will build out space for retailers, restaurants and offices.

The only lease the Dayton’s Project owners have announced so far is a 40,000-square-foot deal that will bring a food hall owned by celebrity chef Andrew Zimmern to the property. A total of 240,000 square feet in the property is being marketed for retail use, Finance & Commerce previously reported.

Project partners declined to say how much the renovation is going to cost. 601w Cos. bought the department store for $59 million last March.