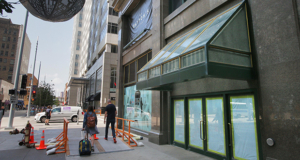 Almost none of the work underway at the Dayton’s Project in downtown Minneapolis is visible to people passing on the street. “Everything is happening inside the building” at 700 Nicollet Mall, said Don Kohlenberger, the local representative of the building’s majority owner, New York-based 601w Cos. (Staff photo: Bill Klotz)

Leasing agents say they will have significant space filled in the Dayton’s Project in downtown Minneapolis by the time it opens in late 2019, even though only one lease has been signed so far.

That opening date is pushed back a full season from predictions earlier this year for the 1.2 million-square-foot renovation project at 700 Nicollet Mall to give building owners enough time to secure historic regulatory approvals. The project has also gotten more expensive, with an estimated budget growing from $190 million to $250 million.

The building’s majority owner — New York-based 601w Cos. — is spending more to make the building more attractive to tenants expected to range from large corporate office space users to trendy workout facilities, retailers and restaurants, according to their local representative, Don Kohlenberger.

“It will affect touch and feel of what you see in the public realm,” he said in an interview on Friday.

Only one tenant has publicly committed to the building, a 40,000-square-foot food hall owned by celebrity chef Andrew Zimmern. The project has yet to sign any other retail tenants, said Jesseka Doherty, a Mid-America Real Estate Group leasing agent who gave members of the Minneapolis Regional Chamber of Commerce a project update last Friday.

But more tenants are on the way. Retailers are showing particular interest in leasing more than 58,000 square feet of available space on the first floor of the Dayton’s Project, said Doherty, who is the vice president of leasing for Mid-America’s Twin Cities office.

“Groups are embracing the first floor,” she said at the Friday event in downtown Minneapolis. 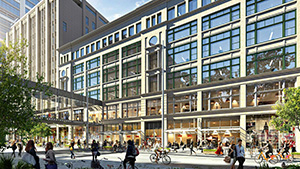 The food hall concept may prove popular enough to take up more space than Zimmern has leased.

“I personally think they could go a lot bigger,” Doherty said.

Individual retail spaces range in size from 333 square feet to 25,200 square feet, according to a Mid-America marketing brochure. 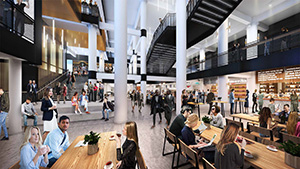 The project’s office space is entirely uncommitted, said Erin Wendorf, a principal with the Minneapolis office of Transwestern, which is handling the leasing for that portion of the Dayton’s project. The 90,000-square-foot floorplates are being marketed initially to companies that would each take 100,000 to 200,000 square feet of space.

Transwestern is pursuing “larger corporate users” that do not currently have a presence in downtown Minneapolis and “large global organizations” that are already downtown but are in need of a second location. She declined to identify any potential tenants.

There are “only certain users that can fit that mold,” Wendorf said.

Transwestern expects to have up to 300,000 square feet of office space leased by the time the building opens.

Key to the office marketing is a 20,000-square-foot speculative office suite that will be built out, decorated and furnished in the next few months. That work is underway even as construction workers install HVAC equipment and other basic infrastructure throughout the rest of the building.

Almost none of the work is visible to people passing on the street or through the skyways that crisscross the Dayton’s Project, Kohlenberger said. 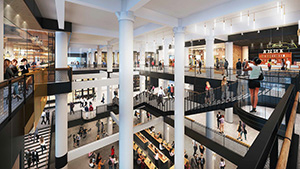 “Everything is happening inside the building,” he said.

The most noticeable exterior work underway is the repair, modification and — in some cases — replacement of more than 500 windows in the building.

The Dayton’s Project is seeking to be named to the National Register of Historic Places, Kohlenberger said. Work on the building will preserve much of its original exterior appearance.

Inside, the former JB Hudson jewelry store space will be kept intact and will likely be leased to a restaurant, Mid-America’s Doherty said. Any tenant in the space will only have enough latitude to change the flooring and the color of the walls.

Project planners added a few months to the construction schedule to allow for extra time to get historic approvals from the National Park Service, Kohlenberger said.