Each December, the Finance & Commerce staff looks ahead to the major projects that will dominate headlines in the coming year. In the past, we’ve struggled to narrow the list down to 10. This year, we realized it’s impossible. As the second-longest economic expansion on record continues, there are just too many big projects in the works worth highlighting.  This Wednesday and Thursday, we’re reviewing 16 of the big developments, from public infrastructure to downtown towers to entire suburban neighborhoods, that we’ll be watching closely in 2019.

Minnesota Department of Transportation officials say the $239 million overhaul of Interstate 35W south of downtown Minneapolis is on schedule for completion in fall 2021. The project covers a 2.5-mile stretch of I-35W between 43rd Street and 15th Street in Minneapolis. (File photo: Bill Klotz)

Size: A 2.5-mile stretch of Interstate 35W between 43rd Street and 15th Street in Minneapolis

Description: Hunker down, Twin Cities commuters. The massive overhaul of Interstate 35W on a 2.5-mile stretch between downtown Minneapolis and Highway 62 is still nearly three years away from completion.

The good news is that the project is going according to plan and some key milestones are coming up in 2019, MnDOT officials said. A joint venture of Burnsville-based Ames Construction, Black River Falls, Wisconsin-based Lunda and Shafer, Minnesota-based Shafer Contracting is overseeing construction.

During the winter, crews will stay busy with a lot of bridges, retaining walls and other scopes of work, said Dave Aeikens, MnDOT’s spokesman for the “35W@94: Downtown to Crosstown” project.

A key project milestone is coming in mid-June, when the 28th Street bridge over I-35W reopens to traffic, he said. In fall 2019, a third southbound lane will open in the project area, Aeikens said.

The scope of work includes 18 new bridges, rehab of four other bridges, new pavement, and construction of new MnPASS lanes in the project area.

Workers will also build a transit station at I-35W and Lake Street for the $150 million Orange Line, a 17-mile bus rapid transit line that will link downtown Minneapolis with Burnsville.

Description: With construction well along in the remaking of the 12-story complex that was once the home of a Dayton’s department store, leasing agents are working at filling the massive space.  Transwestern, the leasing agent for the 850,000 square feet of office space in the building, expects to have up to 300,000 square feet of office space leased by the time the building opens in late 2019.

That opening date is pushed back a full season from earlier predictions to give building owners enough time to secure historic regulatory approvals for the building, parts of which date to 1902. The building recently received approval from the National Park Service to be designated as a historic place, said Don Kohlenberger, a local representative for the ownership group. Work on the building will preserve much of its original exterior appearance. Inside, the former JB Hudson jewelry store space will be kept intact and will likely be leased to a restaurant.

Kohlenberger said in an interview that the majority of interior demolition in the building is complete. Mechanical equipment for the building has been ordered and is being delivered to the job site.

Chef and TV star Andrew Zimmern is the only tenant so far to sign a lease in the building. He plans to operate a 40,000-square-foot food hall and market concept in the bottom floor of the Dayton’s Project. The building will have a total of 250,000-square feet of space. 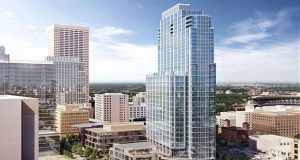 Description: Minneapolis-based United Properties took much of 2018 to sort out what its planned Gateway tower at 30 Third St. S. in downtown Minneapolis will be. The planned glassy tower at the southeast corner of Hennepin and Washington avenues would have a 280-room Four Seasons hotel on 10 floors, 22 apartments or condominiums, ground-floor retail space, and a of 532,340 square feet of Class A office space on 16 floors. The five-star hotel chain committed to the project in November. RBC Wealth Management has signed a 310,000-square-foot lease for office space, which it expects to occupy in 2021. The Minneapolis Planning Commission has approved a conditional use permit for the project, but will go to the city’s Zoning and Planning Board of Appeals on Jan. 10 to appeal some conditions of that approval, said United Properties spokeswoman Sheila Thelemann.

“We are fully committed to the successful completion of the Gateway project, and continue to work diligently to put together all of the pieces of this landmark project for downtown Minneapolis,” she said in an email. 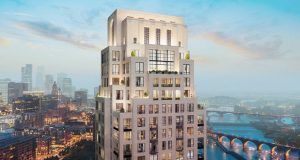 Owner/developer: Ryan Cos. US Inc. and Arcadia LLC

Description: Minneapolis-based Ryan Cos. US Inc. plans to start construction April 2019 on the Eleven condominium tower at 1101 W. River Parkway in Minneapolis. The slender, 118-unit luxury building overlooking the Mississippi River and the Mill District will be the first Minnesota project designed by New York-based Robert A.M. Stern Architects. The project received final approval in fall 2018. Ryan has not released pricing information for the luxury Eleven condo units, which will range in size from 1,600 square feet of space to a two-story, 11,000-square-foot unit on the 40th and 41st floors.

People buying units in the building are coming from other residential buildings in the Mill District, from Twin Cities suburbs and from cities throughout the five-state area, said Carl Runck, Ryan’s director of real estate development.

“We are very pleased with the early interest in Eleven which has resulted in unprecedented reservations prior to the start of formal marketing,” he said in an interview.

The developers plan to open Eleven to residents in summer 2021. 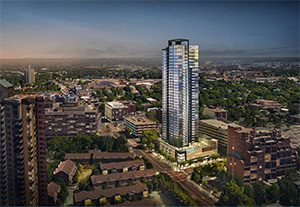 Description: Minneapolis-based Alatus is set to start construction of its luxury Alia condominium tower on May 6, 2019. The developer won a legal battle over the height of the planned building, but the court case set the project back more than a year and a half. The tower – which will rise at 200 Central Ave. SE near St. Anthony Main in Minneapolis – will offer 212 condos ranging in price from $475,000 to $5.9 million when the building opens in 2020. The developer was securing debt and equity financing for the project in the second half of the year. Alatus was also having construction documents drawn up.

The tower’s all-glass exterior will stand out in the Minneapolis skyline, said Chris Osmundson, Alatus’ development director. No other downtown condo building has such an exterior, he said in an interview.

“The goal was to introduce a project unlike any other in Minneapolis,” he said. 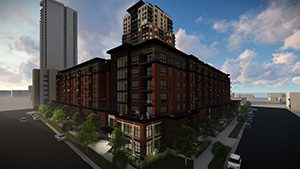 Doran Cos. and CSM Corp. plan to build a 30-story tower and up to 800 apartments on 6.18 acres of property at 311 Second St. SE and 215 Fifth Ave. SE in Minneapolis – which is next to the 25-story, 368-unit Expo apartments the developers have under construction. (Submitted illustration: Doran Cos./CSM Corp.)

Owner: Doran Cos. and CSM Corp.

Description: Already under construction on their 370-unit luxury Expo apartment project in the St. Anthony Main neighborhood of Minneapolis, Bloomington-based Doran and Minneapolis-based CSM unveiled plans last summer for a massive redevelopment of the site of General Mills’ Riverside Technical Center next door. The developers plan to build 800 apartments on two blocks in a project that would include a 100 units of affordable housing. The 700 other units would be market-rate. The project would be built in multiple phases. The buildings would rise next to Expo, which has a 25-story tower and will have 368 units. Expo broke ground in June and is expected to open by mid-2020.

The remainder of the apartments won’t start construction until after Expo is complete and leasing units to tenants, said Doran CEO Kelly Doran. He believes there will still be renters looking for apartments when the project opens.

“I think generally demand for apartments in general is still pretty strong,” he said in an interview.

Description: Minneapolis-based Bader Development plans to build the apartments it is planning in two new 26-story apartment towers and two low-rise apartment buildings on a 5.4-acre site at 3430 List Place in Minneapolis. The new buildings would join an existing 21-story, 113-unit tower built in 1962. The site is a short walk from the shores of Bde Maka Ska (formerly Lake Calhoun) and will be adjacent to the future West Lake Street Station on the planned Southwest Light Rail Transit line. The site is next to the Midtown Greenway bicycle trail.

Construction is planned to start in spring or summer 2019. Twenty percent of the new units are planned to be affordable to people earning 60 percent or less of the area median income.

The project will take five to seven years to complete, said Bader President Robb Bader. He said in a recent interview that he’s optimistic about filling the apartments as they are completed.

“We believe there is a strong demand for market rate housing,” Bader said. 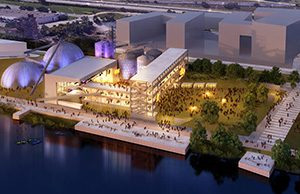 An outdoor entertainment venue that would seat 10,000 people would be at the center of the first phase of development of the Upper Harbor Terminal property in Minneapolis. (Submitted illustration: Coen + Partners)

Description: Minneapolis-based United Properties and city leaders are hard at work hammering out the vision for the mile-long Upper Harbor Terminal site along the Mississippi riverfront north of downtown.

A concept plan laying out the division of parkland, infrastructure and development parcels is headed to the City Council for approval as early as Feb. 1, city spokesman Casper Hill said. That document is a refinement of the draft plan announced in August by the partners, which envisioned up to 140 residential units, 180 hotel rooms, 130,000 square feet of commercial space and an outdoor amphitheater.

If that is approved, there will be more rounds of planning and refining with the goal to approve business terms by early 2020, Hill said. Officials have estimated the project, the first of three phases planned for the riverfront redevelopment, will involve about $37 million in public infrastructure and amenities, from state and local sources. Private development is likely to exceed the $125 million originally projected and could surpass $200 million, Hill said.