A new design that shrinks a retail atrium at the Dayton’s Project in downtown Minneapolis has pushed the building’s opening date back by several months.

New renderings of the $250 million renovation of the building at 700 Nicollet Mall that formerly housed Dayton’s and Macy’s department stores show more detail of what finished public spaces will look like when the building opens in spring of 2020. That date, set in a Sunday press release from the project’s majority owner, New York-based 601w Cos., and developers Telos and United Properties, is a change from a previous expected completion in late 2019.

Project lead architect Gensler has reduced the size of an opening on the skyway level of the building’s three-story atrium by about 500 square feet, said Steve Bieringer, a design manager and lead architect with the company’s Twin Cities office. The change was made at the request of the National Parks Service and Minnesota’s State Historic Preservation Office, Bieringer said. The Dayton’s Project is seeking to be named to the National Register of Historic Places.

The January shutdown of portions of the federal government including the park service also pushed the timeline back, said Don Kohlenberger, president of Minnetonka-based Hightower Initiatives and the representative for majority owner 601W Cos.

The images focus both on new uses for the century-old department store and the historic detail the remodel will preserve. New retail shops and a 40,000-square-foot food hall on the building’s lower level will be set between the building’s original columns. Plaster details, crown molding and even terrazzo and travertine floors hidden for decades under newer materials will return to view, Bieringer said in a Monday interview.

“I think what you’re starting to see here is the design process being relatively complete,” he said. “It’s painting a pretty good picture of what you’re going to be seeing in the public spaces.”

Although much about the remodeled space will be new, including the configuration of retail and office space, Biersinger said enough of the building’s history will be preserved to give people visiting and working in the building a “familiar feel” and a connection to the department store that filled the space for so long.

The project team has announced only one named tenant so far, celebrity chef Andrew Zimmern, who will lease the food hall space. But several retail and office tenants are in lease negotiations with the building’s owners, Kohlenberger said.

“A number of users have queued up,” he said in an interview.

The Dayton’s Project is on track to have infrastructure work including construction of the atrium, installation of new elevators and assembly of new mechanical systems complete by Dec. 31, Kohlenberger said. About 200 people on average will be working in the building every day during that period, with a peak of 500 workers at times, he said. The development team will spend $5 million to $9 million per month on the work.

The general contractor on the job is Minneapolis-based Gardner Builders. 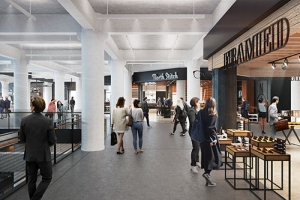 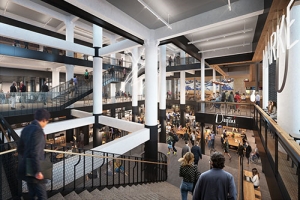 Original columns and flooring and some well-placed Dayton’s logos are expected to give newly renovated spaces at the Dayton’s Project at 700 Nicollet Mall in Minneapolis a “familiar feel.” (Submitted illustrations: Gensler) 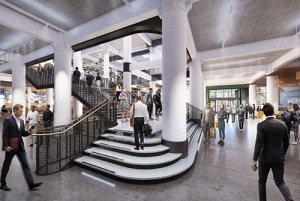 Stairs will be built into the future atrium space at the Dayton’s Project. (Submitted illustration: Gensler) 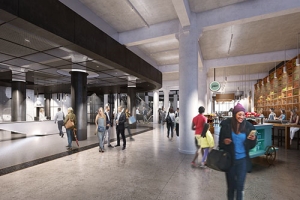 Although office spaces have yet to be designed, the lobby for the space is envisioned butting up to the retail space at the Dayton’s Project. (Submitted illustration: Gensler) 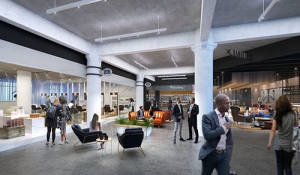 Andrew Zimmern’s food hall will take up about 40,000 square feet of space on the lower level of the Dayton’s Project. (Submitted illustration: Gensler)