Soon contractors are scheduled to begin to cut the openings in the downtown Minneapolis store’s lower floors to create a large atrium. Still, the work has hit delays.

The same development, design and marketing team behind the renovation of the former Dayton’s store in Minneapolis is also in the middle of an even larger project in downtown Chicago – the Old Post Office.

Lunchtime walkers through the Minneapolis skyway at the former Dayton’s department store may see few signs of progress nearly two years since the building went dark for its highly touted rehab. Coiled wires snake down from the ceiling, and temporary walls block all but a narrow pathway.

But out of sight, behind those walls, work has been progressing. In another week, contractors are scheduled to begin to cut the openings in the store’s lower floors to create a large atrium that will be a signature design element of Dayton’s latest evolution.

“We have been hanging on pins and needles to get going on stuff that people will see, but in a project like this 80 percent of the project is that back-of-the-house stuff that you never see,” said Brian Whiting, president of the Chicago-based Telos Group, a partner in the Dayton’s development that has helped lead the planning and execution. “The project has moved forward.”

Still, the renovation has encountered delays. The debut of retailers including a food hall originally planned for this summer won’t happen until at least the spring of 2020, and a major office tenant critical to the project’s success has yet to be signed.

The delays don’t appear to faze the key players betting big money on the Dayton’s development, and they point to the even more ambitious overhaul they’re piloting at downtown Chicago’s Old Main Post Office as evidence of a large-scale revamp that can overcome obstacles common with industrial-sized rehabs.

New York real estate firm 601W Cos., which owns both projects, will spend more than $1 billion combined to transform both neglected structures into modern retail and office complexes. Many of the hurdles that have plagued Dayton’s, including the design challenges of renovating a nonconforming structure with large expanses of floor space and historic restrictions, already have been navigated in the Windy City.

Construction workers in hard hats scurried around the dark belly of the abandoned Old Post Office in downtown Chicago on a recent sunny day as Brian Whiting, the Telos Group president, gushed about the renovation’s progress.

“This is the drama,” he said, as he excitedly pushed up an overhead door that opened to the Chicago River in a city where his team of marketers and leasing agents has repositioned several signature skyscrapers, including the Aon Center and Prudential Plaza.

On any given day, a couple hundred construction workers can be found in the bowels of the Old Post Office, which at 2.5 million square feet is more than double the size of the Dayton’s project, as they try to bring the faded structure back to life.

A rhythm section of jackhammers and drills accompanies contractors as they install escalators, polish concrete floors and do other work to get the space ready for tenants. Pharmacy company Walgreens plans to start to build its space in April so it can move 1,800 employees into the Post Office in the fall.

“We were very attracted to the open floor plan,” said Joe Brady, divisional vice president of real estate for Walgreens.

The Post Office, which is split down the middle by the Eisenhower Expressway that runs beneath it, had been vacant for about 20 years before 601W Cos. bought it in 2016 for a reported $130 million.

Similar to Dayton’s, the Post Office is listed on the National Register of Historic Places, which allows it to qualify for federal historic tax credits. It has been designated a local historic landmark, which helped 601W secure a $100 million tax break from the city, according to the Chicago Sun-Times. But it took longer to get through planning than expected, and compromises had to be made.

During a tour, Whiting pointed to a hallway that divides a floor that preservation experts wanted 601W to keep. Designers came up with a compromise to leave the concrete columns and mosaic tiled floor but open up the walls.

At Dayton’s, the back and forth between developer and local preservation officials has led to construction delays with retail tenants as well as office tenants expected to be able to occupy and open their spaces early next year.

The major holdup happened when the development team sought approvals from state and federal agencies to construct the large atrium that would extend from the second floor to the basement.

The renovation project, which has grown from earlier estimates of $190 million to about $214 million, is eligible for state and federal historic tax credits only with approval from the Minnesota State Historic Preservation Office and the National Park Service. But designers and preservation officials disagreed on the atrium, a major design feature that creates an opening from retail stores to be located on the skyway level to the main portion of the food hall, located in the basement.

“The NPS felt the initial proposals for the atrium modified the historic character of the building too significantly, especially around the entry space,” said Natascha Wiener, a historical architect for the state preservation office.

The government shutdown also slowed the review process. The developers and preservationists came to an agreement last month that reduced the second floor opening for the atrium by about 25 percent.

“These were all interdependent elements. … Now we are in a place where the fun construction is happening,” said Don Kohlenberger, president of redevelopment consulting firm Hightower Initiatives and project director on the Dayton’s project. 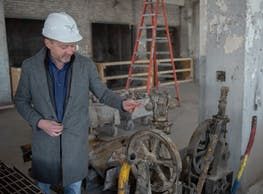 While the atrium has been settled, conversations continue on other smaller historical elements. The roof of the Sky Room restaurant is being preserved as well as the art-deco bathrooms on the fourth floor. However, tenants will ultimately decide how the beloved elements of Dayton’s, like the Oak Grill restaurant and the auditorium, are used.

“I think we’re trying to let the public access as much of the space as they can,” said Steve Bieringer, design manager for the Minneapolis office of the Gensler & Associates architecture firm, which is working on the Dayton’s redesign. Gensler’s Chicago offices are working on the Post Office redevelopment.

A harder sell in Minneapolis

The general public’s nostalgia for Dayton’s, a shopping destination that later operated as Marshall Field’s and Macy’s, has created possibly more scrutiny of the Minneapolis project than what the Post Office encountered.

In Chicago, 601W is a well-known landowner, but in Minneapolis it remains an out-of-towner.

Also, the office floors, which have 92,000 square feet of rentable space in the Dayton’s complex, are unusually large for the Twin Cities commercial real estate market. Dayton’s will have to compete in a downtown market that already has 5.3 million square feet of vacant office space and a vacancy rate of 19.4 percent, according to a report by Cushman & Wakefield.

“Chicago is used to looking at big spaces like this,” Whiting said. “Minneapolis is not. It’s more like a ‘show me.’ ”

To help prospective office users envision what their spaces can look like, builders plan to create 24,000 square feet of showroom space on the fifth floor of Dayton’s along with another 36,000 square feet of finished space elsewhere in the property. To help entice users, the amenity floor is planned to be done at the end of November.

New design renderings have been released, with plans to debut marketing that will be visible in the skyway and on social media. It’s also likely there will be some sort of Dayton’s retail store with branded items since the development team has secured the Dayton’s stylized trademark.