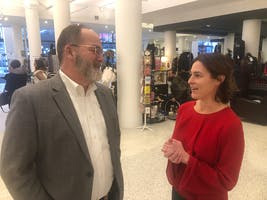 Don Kohlenberger of Hightower Initiatives, the Dayton’s Project local representative, and Meghan Elliott, founder of New History, are key players in the $375 million redevelopment of the historic downtown redevelopment.

The key to the Dayton’s Project $375 million renovation is the former downtown Minneapolis department store’s addition to the National Register of Historic Places — and developer 601W’s savvy at using the designation to boost financing.

New York-based 601W is fueling Dayton’s second life with debt, more than $40 million in equity contributed by 601W and limited partner investors and about $70 million so far in net tax credits.

The historical certification enables the developer to sell up to 20% of the value of the project as federal and state tax credits to limited partners, typically financial institutions. The players can use the credits to offset taxes owed over five years. The credits typically are purchased at a discount to reflect eroding dollar value as they are used over time by investors.

That’s also how government subsidizes such projects indirectly through the tax code. The credits-derived funds can only be used for materials, labor and professional services that preserve historic features.

The four-year-old renovation was delayed by lawsuits and the pandemic, and only this year have tenants started to slowly occupy finished space.

“The owners bring patient capital,” said Don Kohlenberger of Hightower Initiatives, the local representative of 601W. “Dayton’s has new electrical and mechanical solutions. But the antique chandeliers, plaster and a significant amount of the original finishes, such as woodwork and elevator cabs, was used. And updated. Authentic character in a building that operates like new.”

The 12-story Dayton’s at 7th Street and Nicollet Mall was the flagship of the department store company that once spanned from North Dakota to Detroit. As Target became the main focus of Dayton Hudson Corp., it renamed itself and eventually sold off the traditional department store chain. The last occupant of the space was Macy’s, which closed the store in early 2017.

601W bought the 1.2 million-square-foot building four years ago for $59 million.

The renovation is substantially completed, but much leasing remains.

The opening last month of a retail boutique for 35 local entrepreneurs on the refurbished main floor, along with first tenant Ernst & Young’s space, is the first step in filling the building. They use less than 10% of the space.

“We’ll have it substantially leased in 24 to 36 months,” Kohlenberger said. “It will be about 275,000 square feet of retail, and the rest office space.”

The coronavirus pandemic that emptied downtown in March 2020 also slowed the Dayton’s Project considerably, along with lawsuits filed by minority stakeholders spurred by the delays.

The project is one of the largest private preservation efforts in the U.S. The largest going on right now, the $1.3 billion acquisition-renovation of the downtown Chicago post office, also was developed by 601W.

Over the last 25 years, 601W has acquired and redeveloped buildings valued at $12 billion. Headed by veteran New York real estate attorneys and deal makers Michael Silberbergand Mark Karasick, 601W has raised $3 billion in equity and provided double-digit annual returns to investors, according to its website.

Meghan Elliott is the founder of 11-year-old New History, a small northeast Minneapolis firm that has successfully lobbied the state Legislature for tax credit allocations. She helped 601W “access the tax credits and follow the rules,” she said. “My team gets the building on the National Register and navigates the design process and works with the developer, architect and contractor to ensure we’re meeting the design guidelines for preservation.”

Elliott started the firm after moving to Minnesota with her family. In California, she was an earthquake engineer doing “seismic retrofit” of historic buildings. Sans earthquakes in Minnesota, she started New History. She also lobbies the Legislature, through her RevitalizeMN nonprofit and with other tax-credit proponents.

Elliott, pointing to a University of Minnesota 2020 study, said investment by the public in historic preservation projects is worth it because they generate about $9 in related economic activity for every $1 of tax credits.

Since the state credit program was passed in 2010, it has spawned 144 projects, including Dayton’s, transformation of an 1855 brewery building into the Keg and Case marketplace in St. Paul and the restoration of Ely’s Historic State Theatre.

Developers have invested $1.9 billion in projects and the tax credit has supported 18,650 jobs in Minnesota, according to the U.

“Most of these projects just wouldn’t happen without it,” Elliott said.

New History’s consulting team of historians, design professionals and project managers specialize in the regulatory, financial and physical framework of historic preservation and building reuse. The projects have ranged from restoring the exterior masonry of the Security Building in St. Paul’s Midway area to the $10 million renovation of the old St. Louis County jail in Duluth into apartments.

The Legislature has consistently passed tax-credit legislation. And Elliott and other preservation advocates will be back in 2022 asking for a multi-year extension of historic tax credits.

State Sen. Jeremy Miller, a businessman from Winona and Senate majority leader, has been a strong advocate.

In 2015, the rehabilitation of the Latsch Building in downtown Winona prompted at least three other historic rehabs in the loop.

“There’s been a large amount of redevelopment in the downtown area, and I think a lot of it has stemmed off the redevelopment of these historic buildings,” Miller said last spring in extending tax credits for a year.

Neal St. Anthony has been a Star Tribune business columnist/reporter since 1984.